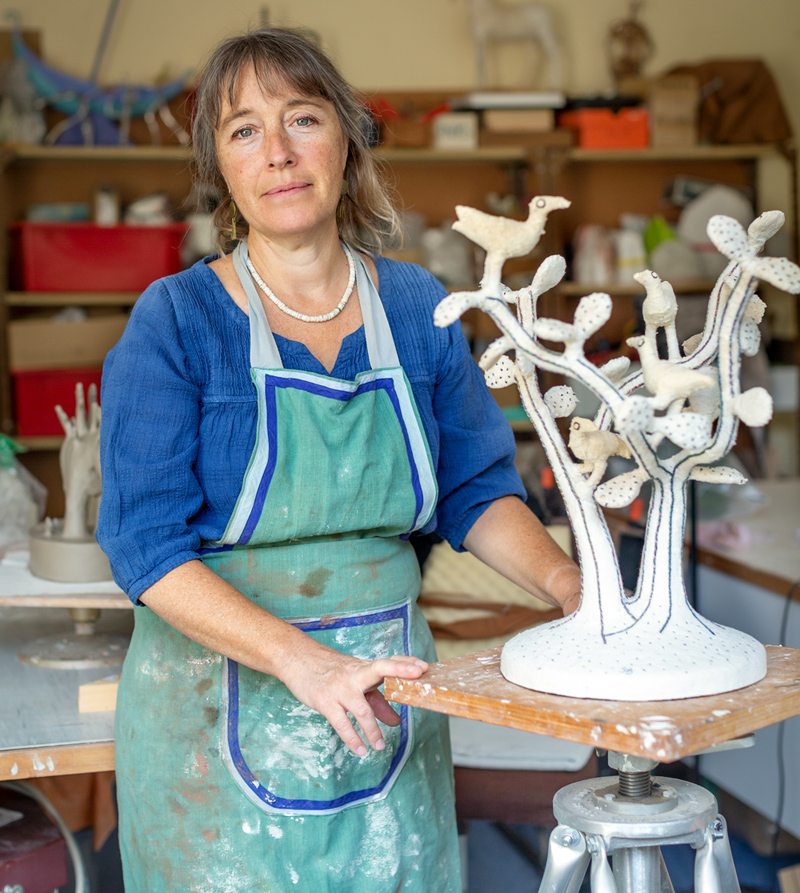 “Sadie’s work in two and three dimensions is full of the Spirit of the Animals. Her beautiful pieces evoked for me so many of the folk tales which I used to read, and shadows of which haunt the recesses of my memory.”

“Sadie’s observation is deep, accurate and precise; her composition of forms, which hint at narrative but aren’t limited by it, represent an unusual talent and vision.”

Sadie’s work explores themes of journey, cooperation, and principally, human-kind’s relationship to the environment and the other life forms that we share it with. It seeks to explore our interdependence, and express her love for the natural world.

“When I was very young paper, paints, glue and scissors were always readily available. Making a mess in this way was absolutely allowed and encouraged. I think this is why I feel a strong connection between the creative processes that I am now engaged in and with my early experiences of play. Indeed, playfulness itself is a prerequisite for exploration.”

Sadie Brockbank graduated with honours from Falmouth School of Art in 1987, where she studied Painting. However her paintings rapidly became more and more three dimensional, with birds and beasts protruding from the canvasses.

Following art school Sadie’s work moved more fully into the arena of Sculpture, building with wood and plaster for a series of sculptures finished with coloured and patterned textile surfaces. She joined ‘The 62 Group’, an organisation of textile artists, and exhibited at various venues including ‘Out of the Frame’ a show at the Crafts Council in September 1992.

Subsequently Sadie became interested in the lost wax process of bronze casting and produced a series of mythical figurative sculptures.

Sadie continues to work in a variety of mediums; principally ceramics, bronze, and mixed media: “Moving between different mediums helps me to maintain a feeling of discovery and immediacy when I am working. It keeps play alive”.

Sadie is a frequent participant of the Open Studios scheme in West Berkshire and North Hampshire, and has exhibited widely in the south of England, at both Art Fairs and Galleries, including the Curwen Gallery (sadly now closed) and the Royal Academy’s Summer Exhibition.

Her work is currently represented by Alan Kluckow Fine Art based in Sunningdale, Cornwall Contemporary in Penzance, Eastwood Fine Art near Stockbridge, The Garden Gallery in Broughton in Hampshire, Singulart, an online gallery, and Modern Artists Gallery in Whitchurch, near Pangbourne.

Sadie Brockbank was a runner up in the Royal British Society of Sculptors ‘First@108’ Public Art Award 2015 in November 2015.

“Myths…. shape different parts of the world inside our heads… as encounters with the inapprehensible, the numinous….” A.S.Byatt, Ragnarok.

Sadie Brockbank’s sculptures, paintings, collage and drawing have stayed fresh and surprising encounters with myth for me over many years. Curves and forces move in the sculptures and paintings complemented by colour or mass so as to catch a moment in some undefined story. Elephants, dog-people, night-birds or deer, the bird on the shoulder, remain absorbing and grow with repeated looking. Sadie’s observation is deep, accurate and precise; her composition of forms, which hint at narrative but aren’t limited by it, represent an unusual talent and vision.

The photographs on this web-site can’t convey the solidity and perfection of movement and poise in the three-dimensional sculptures or the accuracy of line in the pictures, collage and drawings, or the subtlety of colouring apparent in all the pieces. They need to be seen as originals. If you respond to, and can chose to own, one of Sadie’s pieces, it will grow in your sight and enrich a living space indefinitely.